A poem I can’t really explain

Fair warning: I have no idea what motivated this poem. It includes a lot of vocabulary words and is kind of emo, at least for me. So good luck getting through it: 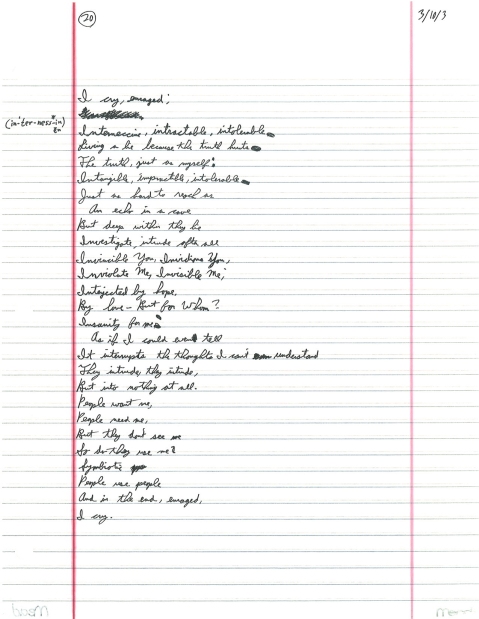 I cry, enraged;
Interneccine, intractable, intolerable
Living a lie because the truth hurts
The truth, just as myself:
Intangible, impractible, intolerable
Just as hard to reach as
An echo in a cave
But deep within they lie
Investigate, intrude after all
Invincible You, Invidious You,
Inviolate Me, Invisible Me;
Interjected by hope.
By love – But for Whom?
Insanity for me
As if I could even tell
It interrupts the thoughts I can’t understand
They intrude, they intrude,
But into nothing at all.
People want me,
People need me,
But they don’t see me
So do they use me?
Symbiotic
People use people
And in the end, enraged,
I cry.

I must have had a bad day or something when I wrote this. Do you see any universal truths in this poem? Any statements about human nature? It’s hard for me to look at any of my old poetry objectively and try to read it out of context, which is both problematic for presenting my old works to the general public, and frustrating because maybe that’s now really the point.

This poem really sticks out to me because it isn’t sarcastic or irreverent, but it’s also really abstract compared to a lot of my other stuff. Like, generally, I see something and think to myself “okay, I get where that came from,” but this one is just like… totally out of left field. I hope you find some enjoyment out of it, because I can’t find much value in terms of poetry or reminiscence.

—–
This post is part of Cody’s “10-Year Idea Reunion” series, in which Cody revisits his creative writing class assignments exactly 10 years after writing them. Learn more about Cody’s Idea Reunion and follow him on WordPress to follow along!