The most dramatic game of Werewolf ever played, part 1: a Werewolf primer

I must tell an an epic tale of deception, of security guards, of teenagers, of drunkenness, of meltdowns, of suspicion, of betrayal, of murder, of mystery. I must tell the tale of the most dramatic game of Werewolf I have ever played.

I feel that it is extremely important to communicate my exact feelings about Werewolf in order to help you fully comprehend the gravity of the drama that transpired during this legendary game, so I have broken up this tale into two parts; this, the first, shall focus on the mechanics of the game as I perceive them:

Werewolf, which you may know as Mafia, is the best party game ever invented (yes, even better than Cards Against Humanity). The rules are simple: a bunch of people sit in a circle, and they’re all villagers. But 1-3 of them are secretly werewolves. A “caller,” who runs the game, narrates when the village sleeps at night (closes their eyes) and announces whom the werewolves have decided to kill each morning, once the villagers have opened their eyes and risen from their slumber. The object of the game is for the villagers to deduce, through various methods, which of their neighbors are the werewolves… before they are all eaten. 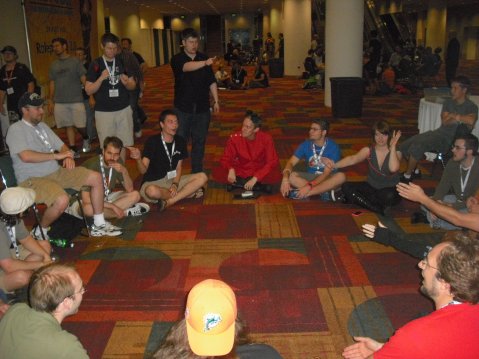 Archive footage of a Werewolf game at Gen-Con 2011

There are many variations on the theme of Werewolf, such as Ultimate Werewolf, a very popular deck of cards that serves as a companion to the game and includes various additional characters, and Wolfnight, a recently released free app that one of my friends developed that also provides a variety of character options. The most common variations include a “Seer,” which is a villager with the mystical power to identify a werewolf (and whom may then strategically divulge that information in order to help the villagers win the game), and a “Sorcerer,” which is basically the bad guy version of the Seer, but whose precise mechanics I don’t recall. Here is the most basic video I’ve found explaining how the game is played and demonstrating how a game might actually go:

Every year I go to Gen-Con, the largest gaming convention in the world, and from 7 or 8 in the evening until about noon the following day, people play Werewolf. The night I discovered Werewolf at Gen-Con several years ago, I played for 7 hours straight, or until about 4 a.m.; the following evening, I played for 8 hours straight (until 6 a.m.), and the night after that, I played for a similar length of time. The game is ridiculously addictive, elaborate, and subtle; it is poker, it is psychology, it is logic, it is luck, it is paranoia, it is panic, it is emotion, it is politics, it is precise, and all of its qualities can be altered by an infinite number of variables. No two games can ever be the same, even if it’s the ninth game in a row played with the same group of twelve friends.

The majority of the “gameplay” of Werewolf consists of villagers debating whom they suspect may be a Werewolf—which, by the way, must most often be deduced with little to no verifiable information. For example, at the beginning of the game, the Caller announces “you all awake to find that someone in the village has been killed, and there is a werewolf among you. You must all vote on whom to kill before night falls.” That’s it. You have nothing beyond that. First-round kills are at best chosen because a player can convince his neighbors that someone in the village has a “tell,” much like in poker (“he didn’t look me in the eye when I asked him if he’s a werewolf,” etc.), and are at worst chosen because someone is wearing a red shirt (“Red shirts always die first in Star Trek, hur hur hur!”) or because someone has a beard and thus physically looks like a werewolf (this happens so often, I don’t think I would even play if I ever grew a beard).

Other first-round kills often include:

Second-round kills are generally more elaborate. Let’s say “dude with the tanktop” spent all of the first round trying to convince everyone that I’m a werewolf, and then after the first round, the werewolves kill that guy. Several things can be deduced:

And so on. Werewolves must be good at bluffing. But at Gen-Con, at least, several factors play into the ability of players to detect whether other players are telling the truth. These factors include:

The game I played only featured a Seer and a Sorcerer, in terms of non-village / non-werewolf characters, but other games of 20+ people have seen upwards of 10 other variable cards, all of which also tweak the game in a specific way and make it even more difficult to tell what’s going on. The game is easy to learn, and may be impossible to master.

Because of the variables involved, the length of time that it takes (or “should” take) to play a game is a point of immense contention among werewolf players, primarily old vs. new. Many times in a group of 16+, for example, some players will insist “we don’t have that much information, so it’s pointless to debate the third kill for an hour; we need to just kill someone and move on,” while other players will insist that “only a werewolf would say that” and that they should spend more time observing and discussing one another in order to make an informed decision. An inexperienced group of mostly high school and college students I found insisted that their games took no longer than 15-20 minutes to play, while a far more experienced group of older players (average player age: probably about 40 years) spent over 2 hours on a single game. Many players in each group would conceivably think that the other group was just wrong.

Recognizing this ideological discrepancy among players is necessary to understand the context of my story, so don’t forget this detail!

One last thing: “living” or “dying” is irrelevant to “winning” the game. If I’m a villager, then anything I can do to help the team kill all the werewolves is a thing I must do, even if it kills me. This is also important, but I’ll get back to it when I get to the story.

Now, I will return back to my notes: stay tuned for the story of the most dramatic game of Werewolf ever played!