We did a fun little writing exercise in class on February 4, in which we completed some sentences to create similes. I feel like I wrote some pretty cool similes! But then, we were supposed to use them as an inspiration for a poem. Let’s see what I accomplished: 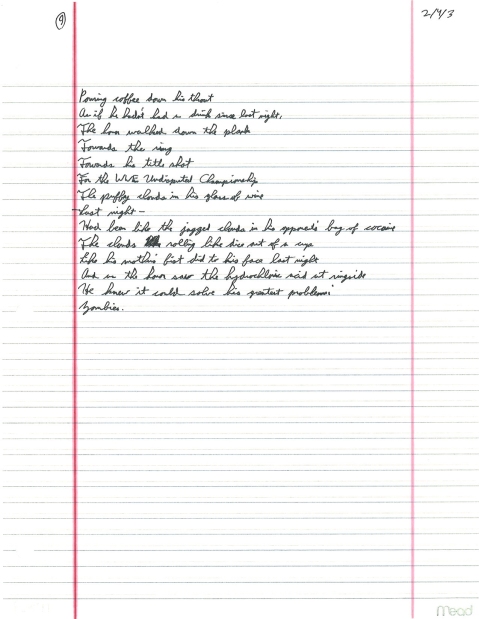 Pouring coffee down his throat
As if he hadn’t had a drink since last night,
The honor walked down the plank
Towards the ring
Towards his title shot
For the WWE Undisputed Championship
The puffy clouds in his glass of wine
—Last night—
Had been like the jagged clouds in his opponent’s bag of cocaine
The clouds rolling like dice out of a cup
Like his mother’s fist did to his face last night
And as the honor saw the hydrochloric acid at ringside
He knew it could solve his greatest problem:
Zombies.

This just goes to show that there’s more to writing than just using literary devices. I think I probably took the assignment too literally, but I came up with something that at least told a coherent story, so… it could’ve been worse? Either way, let’s hope it doesn’t get much worse.

Yay, a writing exercise! My creative writing teacher provided phrases ending with “is/are like…” or “as if…” and we had to finish the sentence, thus forming a simile (although it looks like some of these are just sentences needing completion, but close enough). We were giving this exercise on February 4, but I’m posting it on February 2 because we then used these similes as inspiration to write a poem, and I plan to post the poem on February 4.

I’m going to actually do this exercise, meaning that I will type all of her “set-up” phrases and complete them on my own. Then, I will supply my original 2003 answer, and then we can all compare. And please note that no, not all of these will end up being “similes” strictly by definition. Let’s do it:

A writing exercise for writing similes. Try it out!

The dice rolled out of the cup toward Len like…
2013: an avalanche of rocks spewing from the peak of a mountain.
2003: his mother’s fist did last night.

The fog plumed through the gunshot holes in the train windows like…
2013: a creepy pedophile sneaking into an elementary school.
2003: water pours out of Daffy Duck after Elmer Fudd shoots him.

The grey honor (honor?) walked up the satin plank as if…
2013: he were going to receive a medal for exceptional swordsmanship.
2003: on his way to the ring for a shot at the WWE Undisputed Championship.

Cancelled checks in the abandoned boat seemed…
2013: like an impractical waste of space.
2003: almost as confusing as this awful analogy.

Illanah poured coffee down her throat as if…
2013: she were a robot that needed oil to continue to function.
2003: she hadn’t had a drink since last night.

You mine rocks from a quarry. What you get from a quandary is…
2013: a lot more difficult to understand.
2003: able to rock your mineshaft. (lol)

Marlene dangled the Parson from the question as if…
2013: I have any idea what a Parson is. (and yes, I know I ended that with a preposition)
2003: she actually made sense.

She held her life in her own hands as if it were…
2013: a chip on a roulette table, optimistically willing to let its value be determined by the arbitrary spin of a wheel.
2003: a feather on a windy day.

“No, no, a thousand times no!” he said, his hand…
2013: balling into a fist and preparing to strike.
2003: wrapping more tightly around her waist to keep her close.

The solution was hydrochloric acid; the problem was, therefore…
2013: finding a plastic container that could contain it without dissolving. (Thanks, Breaking Bad)
2003: zombies.

Love is to open sky as loathing is to…
2013: being tightly bound and unable to move, barely able to breathe.
2003: cuddly rabbits and teddy bears.

I was struck by the similarity in my responses for She held her life in her own hands as if it were…; in both of my responses, “she” left her life completely open to chance, leaving fate to decide its outcome. Conversely, my responses to the very next entry, “No, no, a thousand times no!” he said, his hand…, were polar opposites, one ending in a fist and the other ending in an embrace.

It appears that over time, people are capable of changing in some ways, but not others. Or perhaps as a writer, inspiration strikes differently at different times? Perhaps some writers have killed off characters in some drafts, but saved them in others. I guess there’s only one way for me to further explore this theory: write more!